The garden “Giardini di Marzo”, brainchild of the Association of Nature Patriarchs in Italy (Forlì), is embellished with a few plants dating back to hundreds of years ago which were risking their extinction. These monumental fruit trees have a great genetic value as they are long-living and rustic, which enabled them to survive to both climatic and parasitic adverse conditions over the years. Therefore, this garden will represent a small genetic bank including plants with a great value.

This garden was realised as a homage to Mogol and Lucio Battisti for having shown a great awareness towards nature in their songs. The garden is made up of a rest area with a bench that represents the starting point of the path adorned with the “twins” of ancient fruit plants with a high risk of extinction. Each plant is equipped with a panel illustrating their picture and describing their story along with a verse from the song “Giardini di Marzo”, a masterpiece of Italian music.

The Centro Europeo Toscolano is located in Umbria and hosts a school of excellence for musicians and lyricists which is recognized EU-wide. Here you can admire this small garden with a great historic, cultural and genetic value.

The project has provided for the planting of eight plants including: a) the apple tree of Fondo, one of biggest and oldest in Italy that was living in the region of Trentino and is nowadays extinct. The association managed to reproduce it on time, thus saving its precious genetic heritage; b) peach tree of Vallassina, an ancient variety from the province of Como, which is also named “Persic Nobil” due to its yellowish pulp and its intense scent; c) black cherry of Uschione, one of the oldest variety in Italy which lives at high altitude in the small village of Uschione (province of Sondrio); d) big pomegranate of Faenza, the mother plant is an old pomegranate tree located in Faenza and producing very large fruits which can exceed two kilos.

The garden was realised in 2016 and finished in 2017 and is constantly looked after by Mogol and his wife Daniela. A mulberry dating back to hundreds of years ago has been transplanted recently, next to their house. This tree would have been destroyed but the association managed to save it and it is now bearing loads of fruits. 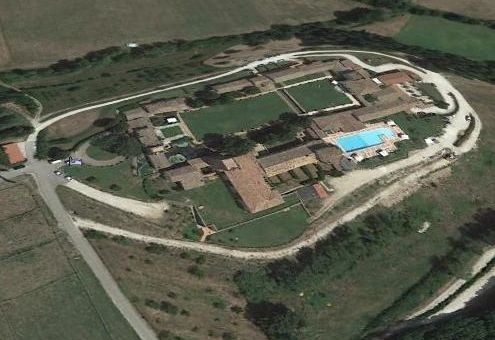